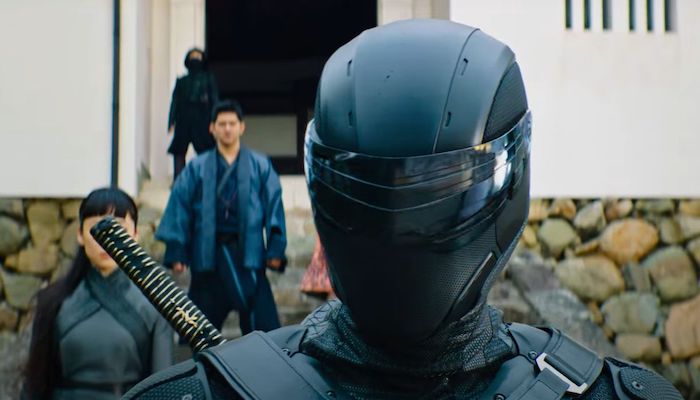 Paramount Pictures has released a new trailer for their upcoming action film Snake Eyes: G.I. Joe Origins. The movie will serve as a spin-off, prequel and origin story for the titular character. Snake Eyes is slated for a release on July 23.

The film will follow Snake Eyes, who joins an ancient Japanese clan called the Arashikage after saving the life of their heir, Storm Shadow. In his quest to become a ninja warrior, his honour and allegiance will be tested by Cobra, a terrorist organization.

Henry Golding (Last Christmas) will play Snake Eyes with Andrew Koji playing Thomas Arashikage/Storm Shadow. The movie will closely follow their brotherly friendship with the latter playing the role of a fellow trainee. However, followers of the previous instalments and the comics will know that their friendship will become an outright rivalry as they find themselves on opposite sides of the G.I. Joe/Cobra war.

The action-packed trailer features tons of sword choreography, vehicle-based combat and provides a preview of the film’s anticipated highway fight sequence. In comparison to the first trailer, the international trailer packs more action while providing more insight into the backstory of the titular character and the Cobra.

The lead character of Snake Eyes was originally portrayed by Ray Parks in the G.I. Joe Universe.

Snake Eyes will be the third instalment in the G.I. Joe Universe after G.I. Joe: The Rise of Cobra (2009) and G.I. Joe: Retaliation (2013). Snake Eyes was a popular character in the previous instalments so the film will be counting on its popularity to make it a success.